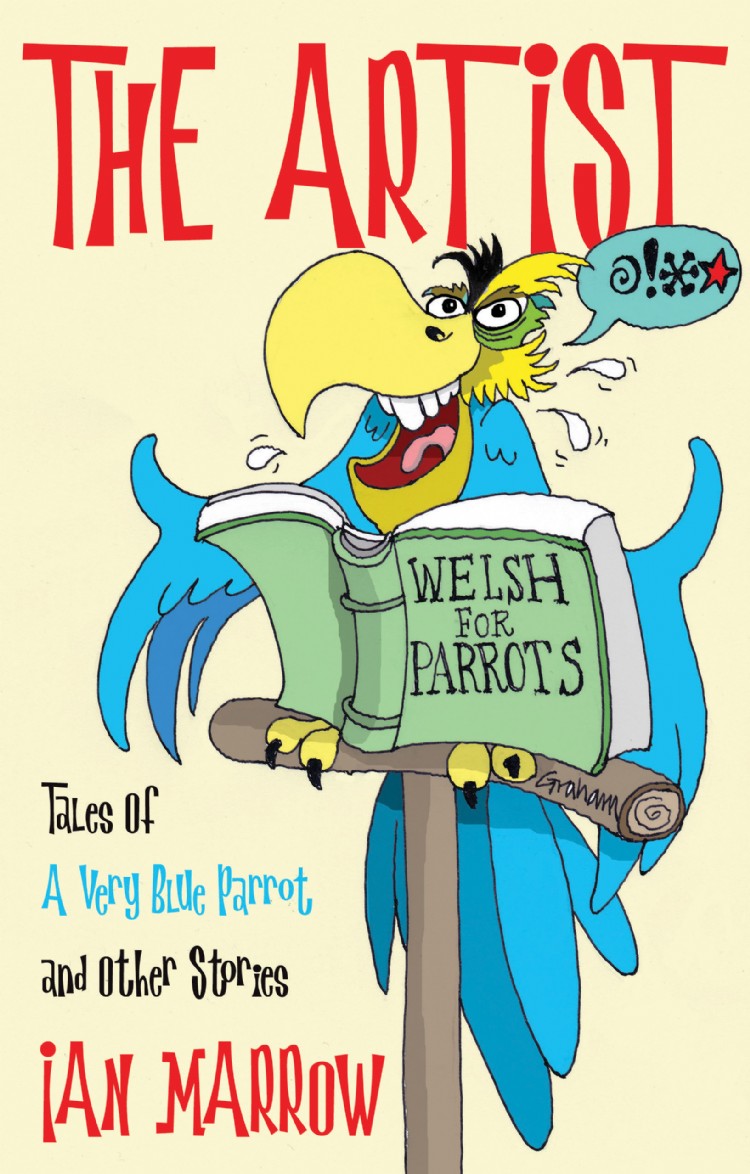 Tales Of A Very Blue Parrot and Other Stories

Crystal, a feisty artist who specialises in nude paintings, decides to move to rural Wales from Manchester after a failed relationship. Going with her is her constant companion, a foul-mouthed parrot called Perkins, whose repertoire includes references to various body parts.
The Artist covers a year of Crystal’s new life and is split into seven self-contained stories. Crystal encounters the best and worst of life in the tight-knit community of Bala, in the picturesque foothills of Snowdonia. She meets David, a local farmer who comes wooing with gifts of fish, and Old Huw, a deceptively caring old gent who gives Crystal some very dodgy advice on the Welsh language, which turns her into a laughing stock when she tries to use it. She gets her own back by painting a picture of Huw in the nude, scaring a flock of local sheep with his huge appendage and persuades his local pub, The Glyndwr Arms, to hang the portrait behind the bar.
In other stories, Bala suffers a power cut as the remnants of Hurricane Harry sweep in from the Atlantic, just as Crystal prepares for the Bala’s Got Talent contest. She and David are favourites to win, despite Huw’s rendition of a Harry Lauder classic – in Welsh – and the Dolly Parton lookalike’s breasts deflating while she tells the story of A Coat of Many Colours. Along the way, David gets embroiled in a boxing match with a local cage fighter, and Crystal comes up against the Women of the Mountains, a nutty Presbyterian sect who object to her presence in God-fearing Wales...
The Artist is a laugh-out-loud collection of tales that are perfect to relax with. It will particularly strike a chord with anyone who has had to get used to a completely unfamiliar place and its ways.
Book Reviews

Most of my working life has been spent as a journalist, mainly on tabloid newspapers at the 'popular' end of the market.

After various jobs during and after college, which included stints as a general labourer, cheesemaker before the word 'artisan' was attached to it, and dustman, I found myself in the late 1960's as a trainee at the North West Evening Mail in the shipyard town of Barrow-in-Furness. It taught me a lot about journalism - not least how to duck when my fiery news editor, Brian Stevenson, hurled Imperial 66 typewriters and other heavy objects in my general direction when he was displeased.

The newspaper remains on Abbey Road in the town, and I wonder if there is still a hole in one of the doors on the editorial floor, left when Brian chased the then editor down the corridor and aimed a blow at his head. The editor ducked and Brian's fist went through the door. After that, the editor became known as Commander Crabwise because he only ventured into our room sideways nervously holding pieces of paper at arms length, which he gingerly placed in Brian's In-Tray before scuttling out again.

Having said all that, Brian was a nice guy and a bloody good journalist, and I learned a lot from him.

The three-year apprenticeship I spent there told me I disliked Barrow, and hated covering local cricket as the sun began to set late on Saturday summer evenings. London called and I answered. A period as a long haired pretend-hippy, including frequent intake of various illicit substances, followed before the Stratford Express in East London remarkably offered me a job. My area included pre-gentrification Stepney, the Isle of Dogs, Limehouse and Bow. The East End was very different then - the Krays were already in prison, followed soon by the main members of the Richardson gang and there was a battle to decide who was going to be top dog. The Stratford Express covered the gangs in much the same matter-of-fact way as the Evening Mail used to cover the doings of the local Townswomen's Guild, and there were numerous stories about bank heists and who had been buried under the Westway arches that week.

An assistant news editor was an East End jack-the-lad who knew all the gangs, and we had inside knowledge of when something big was about to happen. Another had been found in bed with the wife of a very well-known villain, and every night used to exit the car park with a screech of burning rubber to go home, the whereabouts of which were a closely guarded secret. Every Friday night we crossed the road to the local pub, where knock-off goods from the docks were openly carried in from Transit vans parked up on the pavement, and auctioned off. Police cars cruised past outside, but never stopped. Hmmmm?

Another pause, and I was in Aberdeen on the Press and Journal -a very respected and respectable morning paper that covered the top half of Scotland. Notable reporters to work there included, during my time there, Radio 4's Jim Naughtie (good) and later after I had left, Michael Gove (yuk). It was a hugely respected and well-managed newspaper, but I was spending time in Manchester during my generous allocation of days off, as this was the era of the four-day week, so when a job came up on the Manchester Evening News I leaped at it.

Great pay, great paper, but badly managed and it gradually began slipping. One editor was escorted off the premises after fighting a rearguard action against an increasingly Thatcherite management and by the time I left it was a shadow of its former self. Despite being part of the supposedly left-leaning Guardian Media Group, the management were authoritarian, and sadly also pretty stupid. C.P Scott would have been turning in his grave.

After a period of pay freezes and "take it or be sacked" imposed contract changes, a fairly generous redundancy deal sent me packing. I was by this time in charge of the National Union of Journalists chapel at the MEN, and the management were as glad to get rid of me as I was of them. A varied series of jobs followed. With my partner, Georgina, I ran an eight-bed hotel in Chorlton, Manchester, for a while (Goodbye redundancy payment), which we finally closed and turned into apartments.

Along the rocky road to redundancy we had also bought an old piano shop and turned it into a restaurant, which locals in Chorlton will remember as The Café On The Green. It was the first café in what is now the buzzing Beech Road area - and during that period our daughter, Jenny, came along. At the time we were living 'above the shop' in a one-bedroomed flat and I was still working full-time on the MEN.

Something had to go, and reluctantly we had to give up the restaurant, to concentrate on guiding a grumpy young Mosher through the teenage years. She has now grown out of her baggy pants, thrown away the black lipstick and mascara, and is working as an Occupational Therapist helping troubled young teenagers.

After leaving the MEN we bought the hotel and I also became an energy assessor, dabbled in property, and started writing fiction. There are some unkind folk who would suggest this wasn't a big step from my previous profession as a journalist.

Now, well into my bus pass years, Georgina and I probably took the biggest gamble of our lives and bought the derelict Bala workhouse property. The initial purchase was for a ridiculously small sum, but we have since spent at least three times that on restoration, and the sinking fund resembles the Titanic. The workhouse and this book have taken up most of my time during the past two years, and at last, thankfully, one of them is now complete.

I've now written a few books, but am particularly proud of The Artist. It won't make me rich, but I hope people will read and enjoy it.

The author on a cold day in Bala 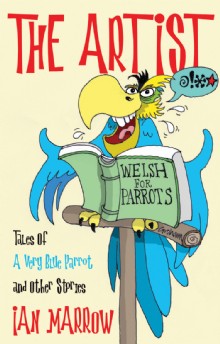 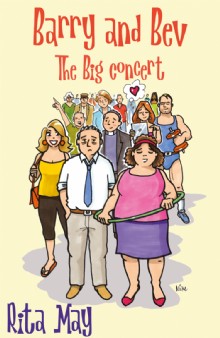 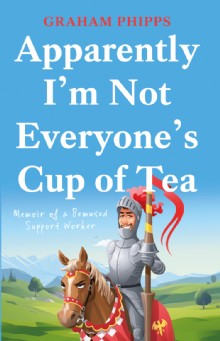 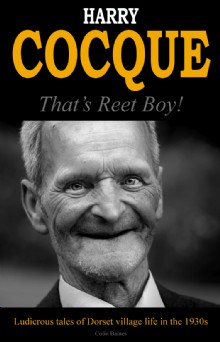 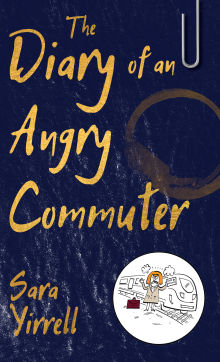 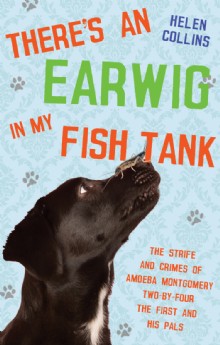 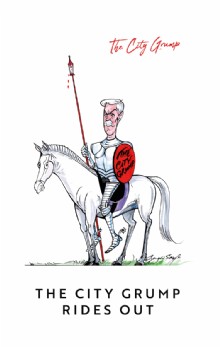 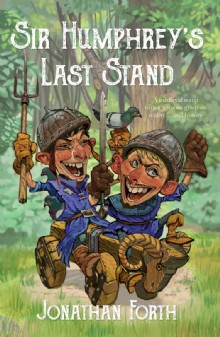