Set against the wild and perilous background of Scotland in the late 13th century, the adventurous lives of Robert the Bruce’s five sisters come to life through their own words in a series of letters. Courage and tenacity are often associated with Scotland’s great hero, but few appreciate the enormous challenges experienced by these remarkable sisters. Their intimate account of family life resonates still with love, loss and hope.

Isa leaves home to sail to the land of the Vikings to become Queen of Norway whilst her sister, Kirsty, finds herself Countess of Mar and chatelaine of the great Kildrummy Castle in Scotland’s far northeast. Danger looms and the younger sisters, Mathilda and Margaret, escape to Orkney with Kirsty’s children. As Scotland spirals into war, Robert’s sisters face the wrath of King Edward of England, whose vengeance wrought the brutal death of William Wallace. Kirsty is incarcerated alone in an English nunnery, whilst Mary endures years of misery within a cage hanging from the walls of Roxburgh Castle. Under Robert’s kingship, old wounds heal and Scotland’s fighting force achieves a resounding victory at the Battle of Bannockburn. Only then are the fragile, traumatised women released, through the ransoming of English nobles, to return home to rebuild their shattered lives…

Sisters of The Bruce is a captivating work of fiction that weaves family history with a gripping narrative through the social and political landscape of medieval Scotland, Norway and Orkney. J. M. Harvey has been inspired by Sharon Penman, Elizabeth Chadwick and Sigrud Undset. 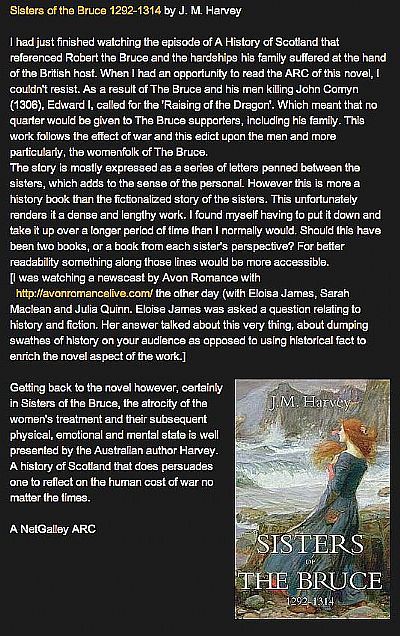 An intimate, intriguing history of Scotland, Robert the Bruce and his family. You'll learn about the atrocities of war in that time period as well as interesting facets of the Scotch and Norse culture. Of special note is Robert the Bruce's forgiveness of former foes in order to rebuild Scotland. If you are a student of history, this book will help you feel like you are right in the midst of the action. Its length is its only detraction.

it was a lot of history and sometimes difficult to keep in context, but I loved the way the letters between the Sisters framed it out. I really enjoyed it.

JM Harvey's Sisters of The Bruce provides a well researched account of the lives of Robert the Bruce's sisters.
Harvey opens up our minds of what these women endured and may have felt during their tumultuous lives.
Her imaginative twist of writing letters that portray believable feelings and emotions of the sisters during this period is well thought out.
I thoroughly enjoyed the story and style it was written in.

The struggles of the men of Scotland to be free of England's control had been written of and put in movies, but the price the women paid has not been as widely known. I was appalled at the treatment the Bruce women experienced on the order of King Edward. I wondered at their survival under such harsh conditions. I was saddened by the lack of human compassion shown them and I was angered at the egos of of the men who allowed the innocent, including young children, to suffer for their power struggles. The author told the tale of the Bruce women and Robert Bruce's fight to be king of Scotland by using various writing devices (letters, narration) with mixed results. There was much information covered in the book and the author told the story from several points of view, but predominantly from that of Isa and Kristy. This became more difficult when Kristy was imprisoned and the author then included fictional letters from other family members. Much of the daily life experiences of the time were included in the tale and provided a backdrop for the story of the sufferings of these amazingly strong women. I would have preferred more of narrative style than the jumping around between writing devices, but do admit that I did learn a bit about the treatment of these women, though I still wonder at how they survived.A different writing style would have resulted in a higher rating. I have not been compensated in any way (other than being given a copy of this book to review) and my opinion on the book is entirely my own.

Interesting tale about the sisters of one of the worlds little know Kings. This will sure to interest those fascinated with Scottish history. 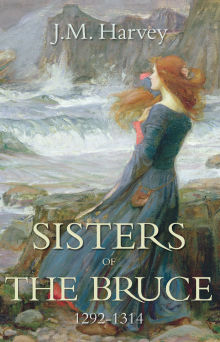 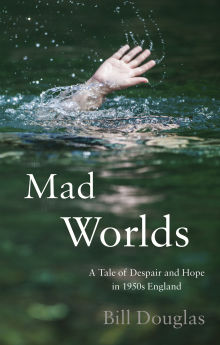 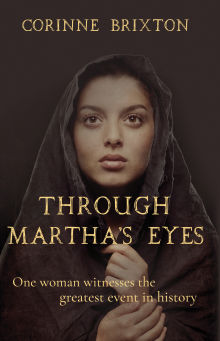 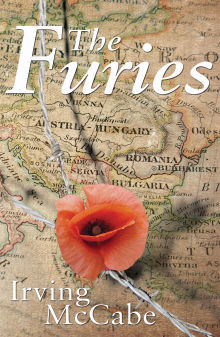 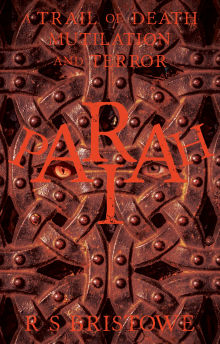