HOME › Bookshop › Historical › IN THE SHADOW OF THE STORM 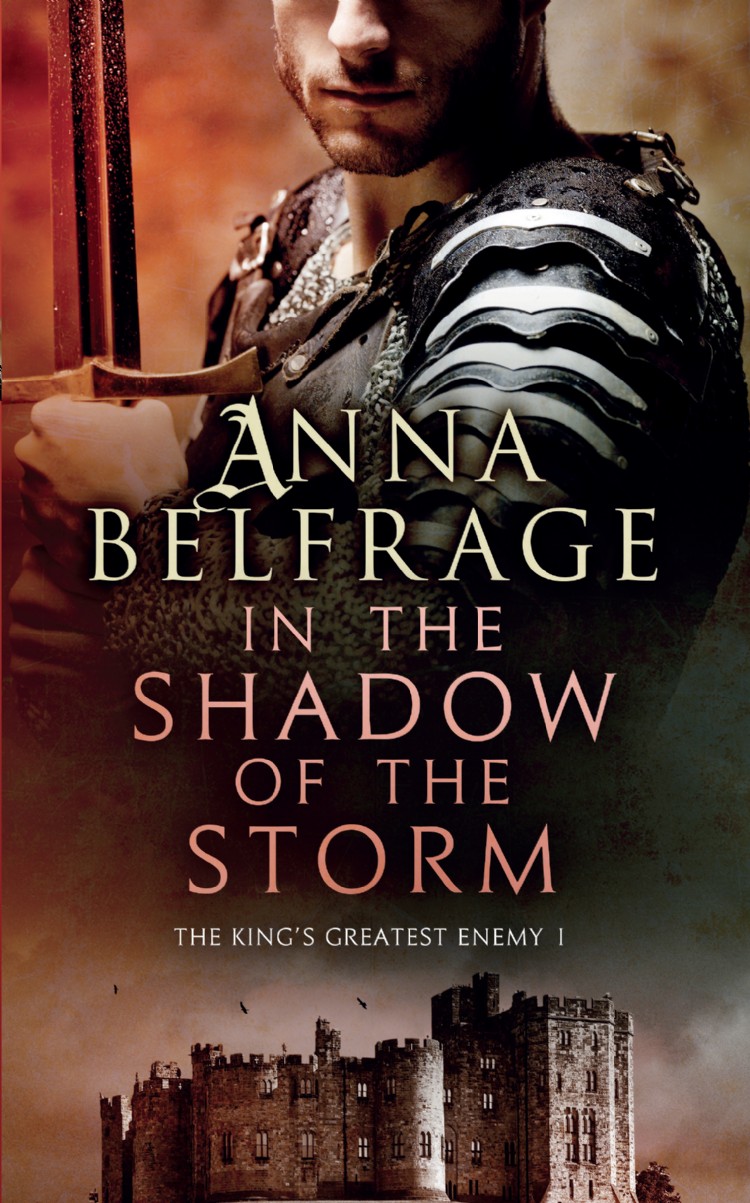 Adam de Guirande owes his lord, Roger Mortimer, much more than loyalty. He owes Lord Roger for his life and all his worldly goods, he owes him for his beautiful wife – even if Kit is not quite the woman Lord Roger thinks she is. So when Mortimer rises in rebellion against the king, Adam has no choice but to ride with him – no matter what the ultimate cost may be. England in 1321 is a confusing place. Edward II has been forced by his barons to exile his favourite, Hugh Despenser. The barons, led by the powerful Thomas of Lancaster, Roger Mortimer and Humphrey de Bohun, have reasons to believe they have finally tamed the king. But Edward is not about to take things lying down, and fate is a fickle mistress, favouring first one, then the other. Adam fears his lord has over-reached, but at present Adam has other matters to concern him, first and foremost his new wife, Katherine de Monmouth. His bride comes surrounded by rumours concerning her and Lord Roger, and he hates it when his brother snickers and whispers of used goods. Kit de Courcy has the misfortune of being a perfect double of Katherine de Monmouth – which is why she finds herself coerced into wedding a man under a false name. What will Adam do when he finds out he has been duped? Domestic matters become irrelevant when the king sets out to punish his rebellious barons. The Welsh Marches explode into war, and soon Lord Roger and his men are fighting for their very lives. When hope splutters and dies, when death seems inevitable, it falls to Kit to save her man – if she can. In the Shadow of the Storm is the first in Anna Belfrage’s new series, The King’s Greatest Enemy, the story of a man torn apart by his loyalties to his lord, his king, and his wife.

In the Shadow of the Storm is the first in the series of The King’s Greatest Enemy.
Lord Roger Mortimer saved the life of Adam de Guirande as a child, now an adult and knighted Sir Adam will so anything in his allegiance to his lord including marry. But is the lady he marries really who they both think she is?

The Guirandes are fictional but Roger Mortimer, 3rd Baron Mortimer, 1st Earl of March was very real and most certainly rose in rebellion against the king, the first instalment follows Mortimer, Adam and his new wife Kit. When the rebellion begins Adam has no choice but to ride with Mortimer whether Kit supports this or not.

Before they can ride off to war Adam discovers his new wife Katherine de Monmouth is actually Kit de Courcy both daughter of De Monmouth but different mother's and until now Kit had not been known about to any but her parents. Katherine was having an affair with Mortimer which Adam is jealous over until he realises he didn't marry Katherine he married Kit. But was this betrayal any better?

The war makes Kit realise she has fallen for Adam and will do anything to save his life but will it be enough? Hugh Despenser, enemy of Mortimer is determined they should all die, so who lives and who dies?

Fantastic historical fiction with romance thrown in. I love the characters. Belfrage has created characters you just cant help but love or hate. The depiction of Despenser is incredible! I couldn't put this down until I'd finished. I'm already lining up the next in the series!

This historical fiction based on fact is extremity interesting and well written. The main characters, though fictitious, are very believable. The early 14th century England was filled with unrest due to a weak King Edward II and his favorite, at the time, Hugh Despenser the younger. It is hard to imagine a king acquiescing to the machinations of such an evil, greedy man.

The romance between Adam de Guirande and Kit is very well done and makes you hope there was such a love in those times. The writing is fluid and easy to feel.

Definite recommendation to readers of historical fiction and those who like a good romance.

The first in a new historical fiction series with a touch of romance. Set in the England of 1321 i found the story engaging and the characters very interesting, can't wait for the next one.